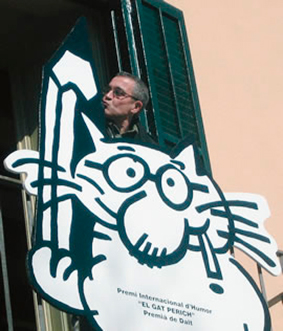 Vilagarcía de Arousa, 1947 - Barcelona, 2009.
Rubianes defined himself as a half Catalan half Galician playboy. He came from a small village in Galicia to Catalonia, where he studied, trained and developed his entire career. He acted in both Spanish and Catalan, but generally acted in both languages ​​simultaneously, alternating them unexpectedly, even introducing the occasional phrase in Galician. From very young he showed his penchant for interpretation. At only 16 he made his debut in a show by the National Organization for the Blind (ONCE). But it was at the University of Barcelona, ​​where he graduated in philosophy and where he became familiar with the stage. He first joined the group T.O.C. (University Theater of Camera). Later he joined the NGTU (New University Theater Group) where he met members of the future Dagoll Dagom, with which he collaborated several times in his career. In 1977 he performed "No hablaré in clase," the third Dagoll Dagom show, as a member of the company. With the success of the performance as well as the rest of the training, he soon had the opportunity to become a professional actor. Taking this decision, in 1978 he participated in the fourth show by Dagoll Dagom "Antaviana," a musical that became a critical and popular success. Rubianes toured throughout Spain, with performances in France, Italy and Switzerland. In 1981 he joined the cast of "Operació Ubú dels Joglars", performed in Theater Lliure. El 1981 Rubianes decided to go his own way. He opened his show "Pay-Pay", performed for over three years in various venues in Barcelona and other Spanish cities, as well as solo performances in Central America: Cuba, Mexico, Panama, Costa Rica, Nicaragua and Guatemala. In 1984 he premiered his second book, "Ño", based on several cities in Spain, Argentina and Uruguay. The 1987 release of "Sin palabras" and 1988, "En resumidas cuentas" ... anthology of the greatest moments of his first three shows. Rubianes ended the 1980s with great prestige, which significantly expanded in the following decade, success with shows like "By the love of God!" (1991) and "Ssscum" (1992), which placed him among the greatest of renowned stand-up comedians. In addition, in 1990 he was introduced to new media such as radio, film and television, which gave him great social popularity. He was the star of the television series "Makinavaja", an adaptation of a popular comic strip cartoonist Ivà. This show gave him notoriety that would stay for a long time in Spain. In 1995 he premiered his show in Barcelona "Rubianes 15 years", which brought together the best sketches of his solo shows since 1980. In 1997 the show "Rubianes, alone" was launched. In 2006 he presented his show "Lorca eran todos" to mark the 70th anniversary of the death of Federico García Lorca.